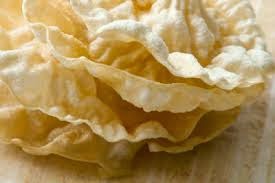 A feast without Appalam is known as half feast. Appalam is being that much important in our food. In village side, still rice gruel and fire roasted appalam is the important food for the morning time workers. Long years before, if we had purchased appalam in any place of Tamilnadu, that prepared appalam’s dough would have been pestled (Ulaka) only from the mortar of Kallidaikurichi. So this means that each house in kallidaikurichi is involved in the production of Appalam as cottage business. At present the trend is so changed that the big machines in cities are preparing a day’s total appalam production of Kallidaikurichi within an hour.

Kallidaikurichi is a beautiful small town, located in the banks of Tamirabarani river. Kallidaikurichi consists of 18 Aghragharams. Here the people are living a traditional life. This Appalam production was started as a pastime by the aghragharam women who were wedlock in the young age. The matchless combination of serene Tamirabarani water taste and the cooking skills of aghragharam women introduced the appalam to the other cities. The high response to Kallidaikurichi appalam involved all the people to start this appalam business. 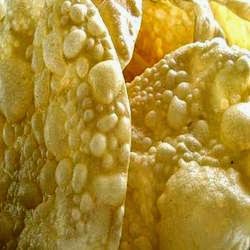 Calcium Carbonate, Salt, Asafoetida and water is mixed with urad dal and then it is kneaded to the consistency of chappathi dough. Then the dough is pounded in the stone mortar (Kal Ural) for half an hour. The pounding helps the dough to become soft. Then cumin seeds are added, it is spread like poori dough and then dried. Perfection is needed to dry the appalam. At first it is dried in shadow then it is taken to sun light and again to shadow. Once it is dried well, it goes for packing.

Arisi Appalam preparation is a different one. Four parts of rice flour, one part of Sago flour (Javvarisi Mavu) and salt is mixed and prepared as dough. Prepare small balls and cook it in the Idli steamer. Cook it well and add the required amount of green chili paste. It is pounded in the stone mortar (Kal Ural) then made as balls, spread and dried.

It is a pleasure to know about the most famous (morru morru) “Kallidaikurichi Appalam.” Start making the sense of crispy taste in your feast with our Appalam.