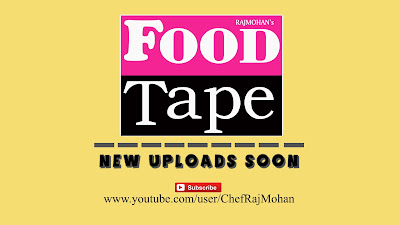 Most glad to unveil the Food Tape poster and happy to say that I am in the process to launch an exclusive food tube channel named “Food Tape” in Youtube as soon. This space is dedicated to the food lovers and who all initiated me for this front.

I am looking your generous support to extend the Food Tape views and subscription. Don’t be as stranger, come and join with me by clicking the below given subscription link of the Food Tape page. This subscription is available free and the food tape will upload every week. You will get the beautiful recipes and the easy cooking methods on your favourites. You could share your recipes, food thoughts then you could be with me through my food programmes and funny footages.

So, come and join with the Food Tape family. Please tell me, what you want on screen and your latest food stuffs. Visit the link and press subscribe -

Pray for all my deeds and thanking you
Posted by Chef M.S.Rajmohan at 6:18 AM No comments:

Note: Use amla depends on the tanginess you really need for your rice.
Posted by Chef M.S.Rajmohan at 2:49 AM No comments:

2. Let the rice to mash well, once it forms the sarkarai Pongal stage add the sugar.

4. Now drop the golden ghee fried cashewnuts, raisins and other ingredients into the sweet mixture. Stir all around.

5. Take it out from heat then add tender coconut water. Mix nicely and serve it as prasadham.

Posted by Chef M.S.Rajmohan at 1:05 AM No comments: 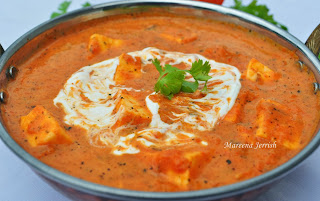 If you have Naan or Roti before your table, what would you suggest us an accompaniment? Your eyes would stroll to the menu card to find the creamy cashew gravy for your stuff. Yes it is your lovely Makhni gravy.

There are few dishes in Indian food which are most popular and recognized worldwide and Makhni Gravy also has a special place for it. This is most favourite food of any Indian Food restaurant. The taste of Makhni is accepted both by the vegetarian and Non -vegetarian food lovers. Butter in Hindi means "Makhan", Makhni gravy is prepared by using butter generously. Often it is stylishly known as “Butter Masala.”

Cashew paste, Cream, honey and butter are added to bring the Makhni gravy to creamy texture. The original fragrance and taste is excelled by bringing in Kasthuri Methi leaves. Sometime this is called as the National Dish of India by food enthusiasts. This has the bit spicy, sweet and tangy taste which is well balanced and that may be the reason for everyone to like the Makhni dishes. Makhni dish tastes good with Naan, Roti or Indian Breads, Pulao and Biriyani. Interestingly, due to its delectable taste and creamy texture, in some foreign countries the Makhni gravy is served as Sweet.

This shall be great for us to know the preparation of Makhni gravy in the food outlets. If you know the basic recipe, you could surprise your family with Makhni dish with restaurant taste and save your weekend budget. For that purpose I share with you the best Makhni Gravy recipe.

1. Heat oil in a heavy bottomed kadai, sauté the onion till golden colour. Then take it out from kadai let it to be cool, after that grind it well.

2. Heat butter and oil in a heavy bottomed kadai, add the whole garam masala now. Once it splutter add tomato paste, fry it well in butter.

3. Add the ground onion paste and ginger, garlic paste. Stir continuously then add masala powders one by one. Sauté it up to the oil separates from masala.

4. Once it is sautéed enough, add the boiled cashew paste. Mix and cook for another 10 minutes in slow flame.

5. End with fresh cream, fenugreek leaves, honey and butter. Mix and take it out from fire.

6. Garnish with swirl of fresh cream. Serve hot with Pulao and Indian Breads

Note: This is only the preparation method of Makhni gravy, you would add your choice of fundamental ingredient with the same.
Now you tell me Makhni gravy or Butter Masala?

3. Again let it for dry for another half hour. Give the shape of balls to the mixture           and roll it over the sugar grains.

1. Soak the kollu (horse gram) overnight and boil it well to mash with your hands. Carefully mash the kollu first then add the remaining ingredients.

2. Ensure the mixture should not over mash that should be easy to pat the mixture in your palm.

3. Cook it in non-stick pan with gingelly oil as medium.