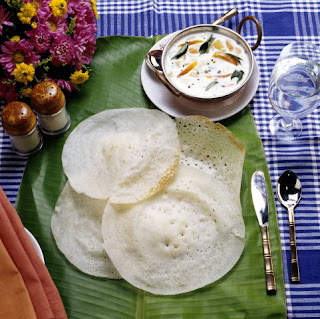 Golden crispy dish with white fluffy inner –absolutely it is a gorgeous handsome delicacy "Appam". In India, appam used to be the favorite breakfast of keralities. But now the trend is changed. The taste of appam takes it across the world wherever Indians live. Countries like Sri lanka, Malaysia, serves beautiful varieties of ‘appams’ and it is a top notch favorite in the restaurant card.

Appam is another fermented pancake in south India like dosa and it is cooked in specially designed cook ware and needs bit of experience to acquire the original shape of the appam by waving the appam batter in the special cookware (made by cast iron). It is an art that needs some skill, though visibly quite easy but not in reality.

Appam is cooked by combined effect of heat and steam, by closing the appam ware with lid produce steam that makes appam fluffy and steamy soft. Because of its captivating look and being also liked by children’s, most vegetarians’ joints too include this dish in their menu. In Tamilnadu most of us like to eat Appam in the dinner time too.

Kallappam is a type of special appam in which toddy is added to ferment the batter. It gives good taste to appam and this is not cooked in specific appam ware hence it is poured over tawa and cooked as like ordinary pancake.

Good appam have always slight sour and sweet taste and all bind heavenly with dippings in a curry.

Soak rice for two hours in water, dry it well and after this coarse or grind it along with other ingredients.

Reserve the batter for six hours for fermentation.

Adding more urad dal destroys the colour and the original taste of appam and if it is more, it sticks to the cookware and makes into brown quickly.

If appam is not coming out easily from the ware or it’s stuck to the ware, just rub the inner portion of the ware with onions or fry some eggs or do some tempering. Later you pour the batter and now the appam will not stick.

Preparation of appam batter varies to bring out the distinguished tastes. Each batter style differs in addition or substitution of ingredients in preparations. Some use yeast for fermenting the batter.

Method
Soak rice in water and dry it well. Add grated coconut and boiled rice combine all ingredients and grind it in dosa batter consistently. Afterwards let it be kept for fermentation. It is the easiest household method when it often called as “Palappam”.

This is a style of batter preparation we would see across Tamilnadu, mixture of two different rice and urad dal.

Method
Soak rice and urad dal and combine all ingredients, grind it like dosa batter. Ferment and use.

This is another style of using rice porridge in the batter to ferment.

Soak rice and dry it. Then powder it.
Sieve the rice and use the residue in the siever to prepare the porridge.
Now combine all ingredients. Prepare the batter as little thinner than dosa batter.

Add salt and soda salt at the end

Some use yeast in appam for fast fementation, but it gives hard flavour to appam. This is mostly preffered by industries.

Readers, I believe such an intro’s and bread and butter tips on appam may help household to dish out different styles of appam in their respective house to delight their family.

I shall appreciate your feedback.
Posted by Chef M.S.Rajmohan at 4:53 AM