The Story of Tirunelveli Halwa

Tirunelveli is famous for delicious sweet halwa….. as you all know. It’s a great culinary creation and the visiting card to the inhabitant of Tirunelveli. Tirunelveli halwa is golden brown, has a jelly-like texture and contains a ghee, which gives its distinctively greasy appearance.Because of its divine taste, this sweet dish name spreaded all over. The Tirunelveli peoples are the relatives of alwa, they wouldn’t leave a day without tasting this elixir, even taken with Idli and Dosa.

But this three centuries old halwa have the interesting backdrop !!!!!

At first in Tirunelveli, halwa was introduced by the rajputraa peoples of Rajasthan who came to chokampatti (Tirunelveli province) for serving Jamindhars. Those cooks created and presented the wonderful alwa to chokampatti Jamindhar. Early days, the halwa was sold in streets by walk. 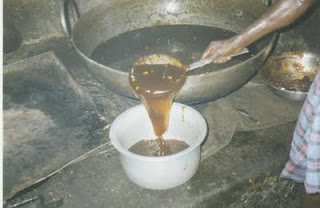 By the year 1882, Mr.Jegan Singh, a father of Halwa opened the first halwa shop in Tirunelveli named “Tirunelveli halwa”.

Originally the word “Halwa” derived from the Arabian root means Sweet. The Tirunelveli Halwa is primarily made from wheat, sugar and Ghee. The right proportion of mixing the ingredients and the special recipe of this region are said to its parents.

“Invasion of ingredients, many varieties of alwa’s are available around us, Our Tirunelveli alwa is best among all”

Correct fermentation of wheat milk awarded crumbleness, tiny holes and sharp taste, authentically prepared halwa will last more than 15 days. The combination of ghee, cashewnuts and nutmeg emanates celestial flavour to the alwa. The Thamirabarani river water is the husband for Tirunelveli alwa, the copper content in this water embraced and giving heavenly taste to the sweet dish.

After its we all know why the halwa has become synonymous with the city, enjoy the taste while visiting to halwa city …....
Posted by Chef M.S.Rajmohan at 5:39 PM

chef raj ur giving great information to every one !!!!!!!im waiting for ur next information ....keep it up ....good luck

Chef Raj, great article. Good to know the history of the halwa. Now we can get Tirunelveli halwa delivered at home anywhere in India from www.givehalwa.com. Will definitely give it a try.

great article Chef Raj. It is grea to know the history of the halwa. We can also now buy Tirunelveli halwa from www.Give Halwa.com and they deliver anywhere in India.

Sudhakar most grateful for your comments and reserved it.

Aadhar your comments are treasured and you developed a beautiful concept for halwa lovers..